On Tuesday, 6 May 2014, Amsource submitted preliminary plans to the City Council for approval. This property is located at the southeast corner of Cedar Hills Drive and North County Blvd., directly across from Chase Bank. The proposal includes the construction of an America First Credit Union and two retail pads. Amsource is hoping to break ground as soon as possible and would like to have the retail pads open for the coming holiday season.

The site plan provided by Amsource shows the America First Credit Union (AFCU) on the corner, across from Chase Bank, with two retail pads called Building A and Building B to the west. 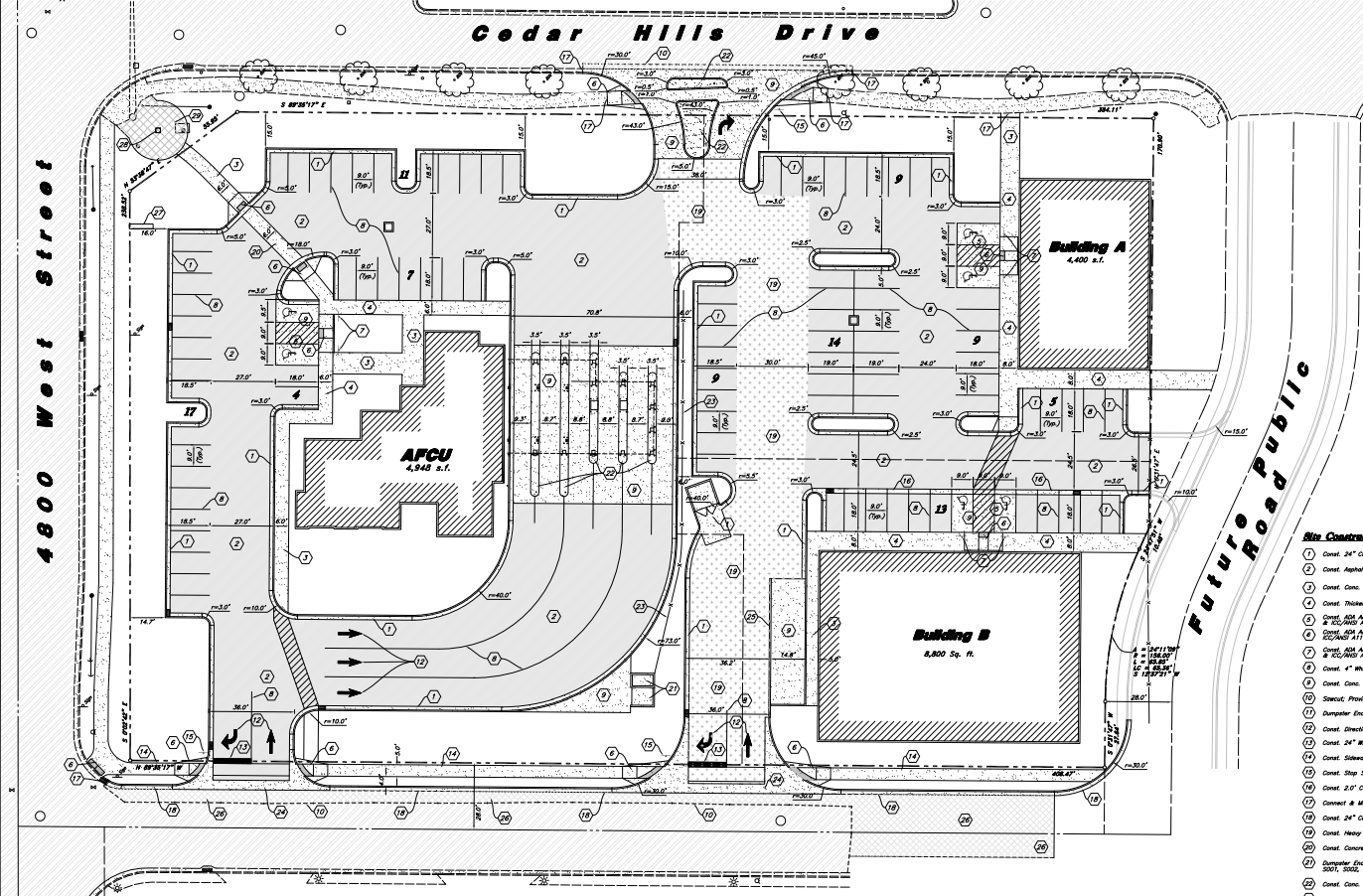 On the south, the road between the AFCU and Harts will be lengthened and widened, to provide access to the credit union and retail area. On the north, there will be a right-in/right-out access off Cedar Hills Drive. The existing median will prevent a left turn into the development from Cedar Hills Drive, since the turn is too close to the intersection.

The main topic of discussion at the city council meeting was the construction of the road labeled Future Public Road to the east of the development. This road is mostly on the Smart property, with a small portion on the Amsource property.

Chief Freeman, from Lone Peak Fire, would prefer that this road is built as part of the development. This would enable emergency vehicles quick access to the retail stores. However, Amsource does not have the ability to create this road on its own, since it is on the Smart property, and the proposed development on the Smart property is likely not moving forward at this time. Chief Freeman stated this would result in 30 seconds of extra time to make a series of three left turns, to access the area via the road between the AFCU and Harts. The council left open the possibility of a temporary road until development of the Smart property.

Our Commercial Development Guidelines require 30% of the development to be landscaped, with plans approved by the planning commission and city council. 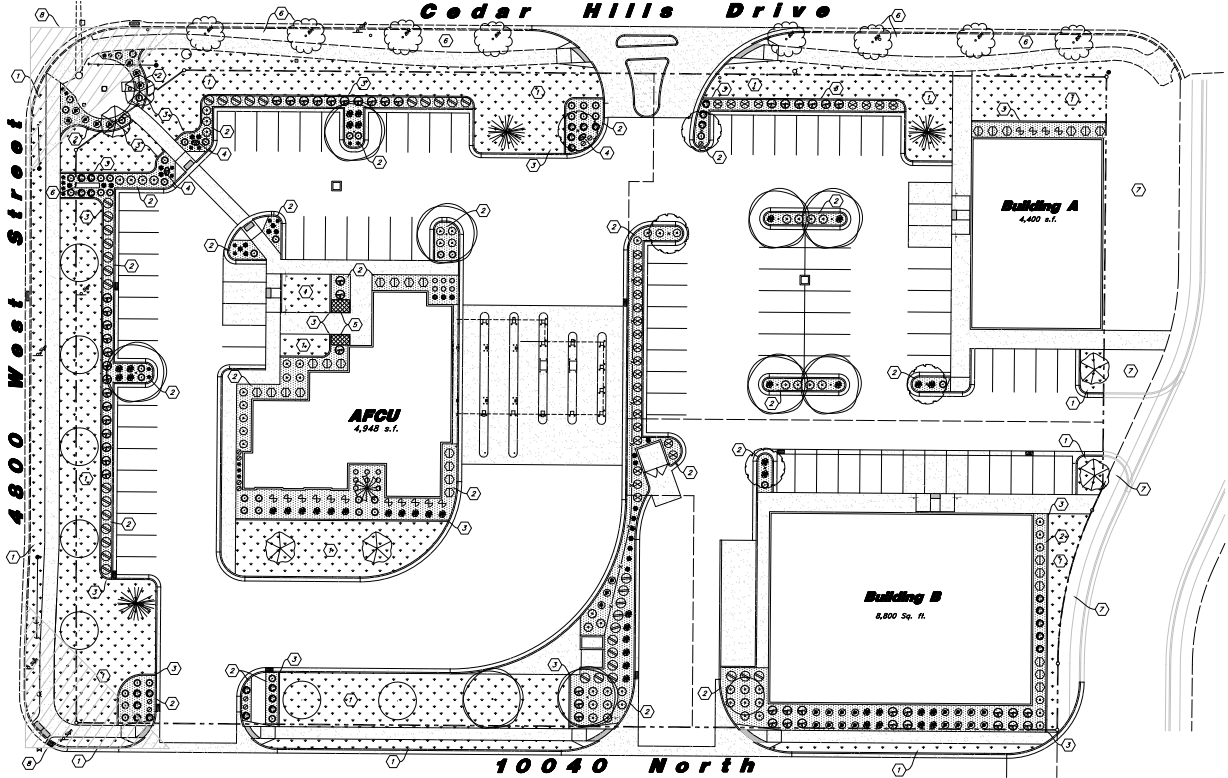 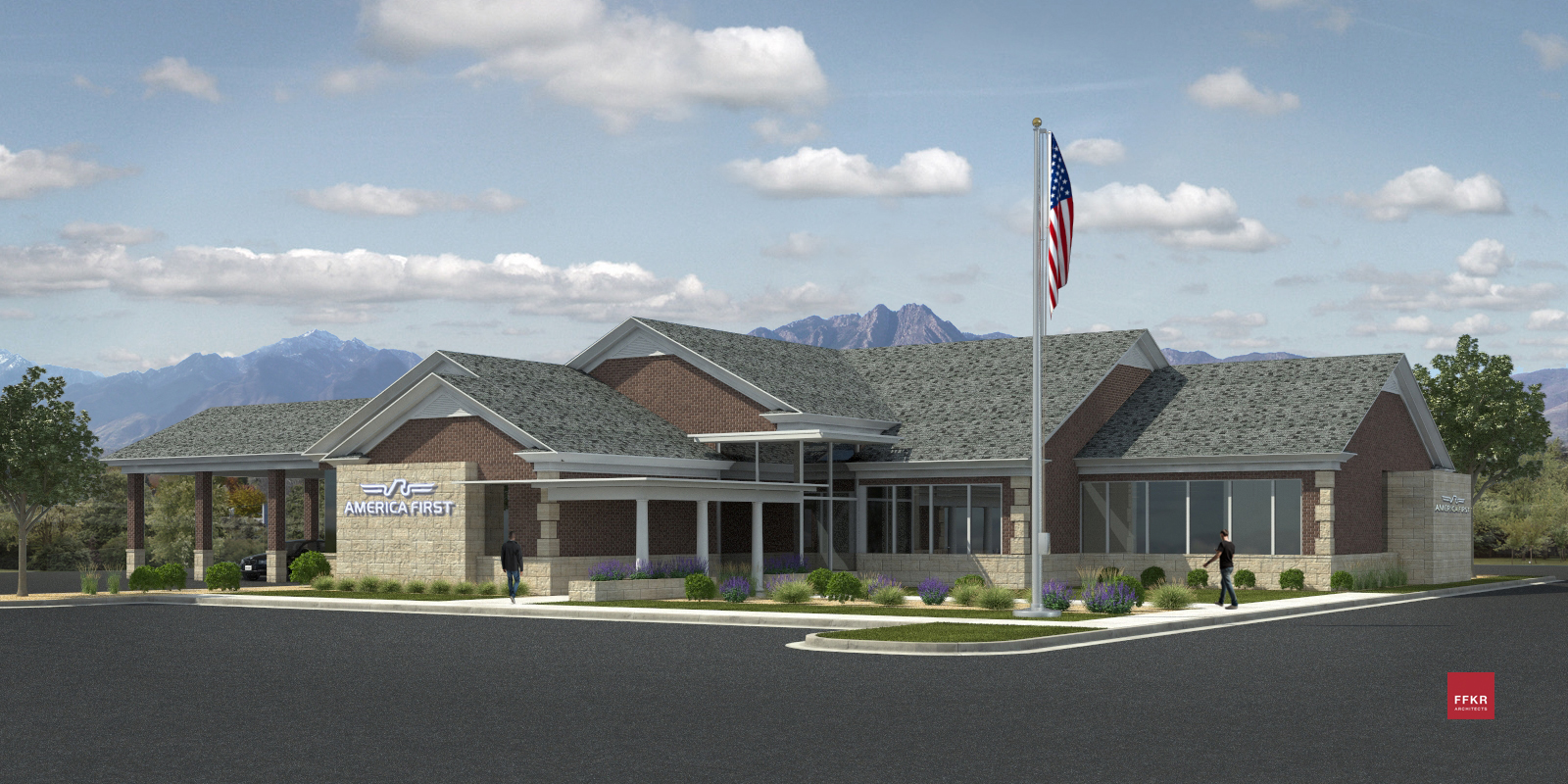 The rendering of the AFCU shows some colonial elements, such as the columns along the entryway and a brick facade. It's a little bit difficult to match up this rendering with the site plan, but I believe this is a view from the north side of the building.

The architecture of the building should follow the colonial style more closely. Our Design Guidelines say:

The particular theme that has been selected for this project is American Colonial. The American Colonial motif is a symmetrical design (ABA, ABCBA, etc.) style. High-pitched tile or slate roofs, either side gabled or hipped, overhang the front facade and are often capped with a cupola. A central door, often a French door, is sided by large windows on the sides. Buildings may use the classic temple front, or contain pillars, pilasters and the Palladian window. Exterior construction is normally of brick in traditional colors like red and brown, and makes use of substantial exterior moldings. Wrought iron or copper accents are also used.

I would like to see the incorporation of design elements from other buildings in our commercial area, such as parapets and dormers on the roof, white trim on windows, and stronger use of white columns. I would also like the entrance of the building follow the design of a central, French door, with large windows, similar to Chase.

The elevations show the height of the building and some of the materials: 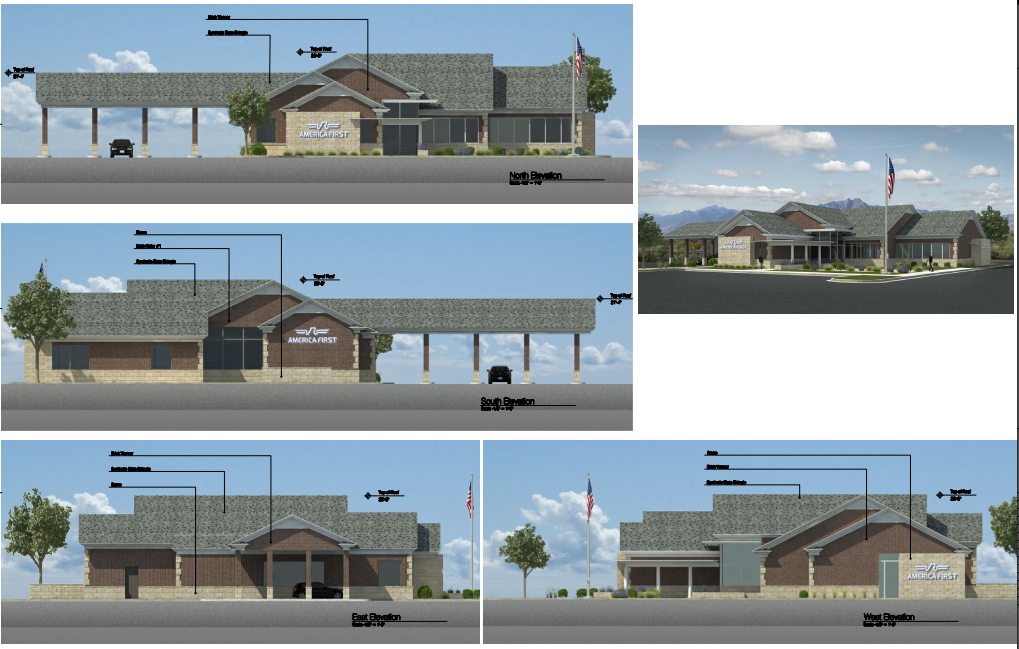 The retail building A and B elevations show the elevations and materials for the pads: 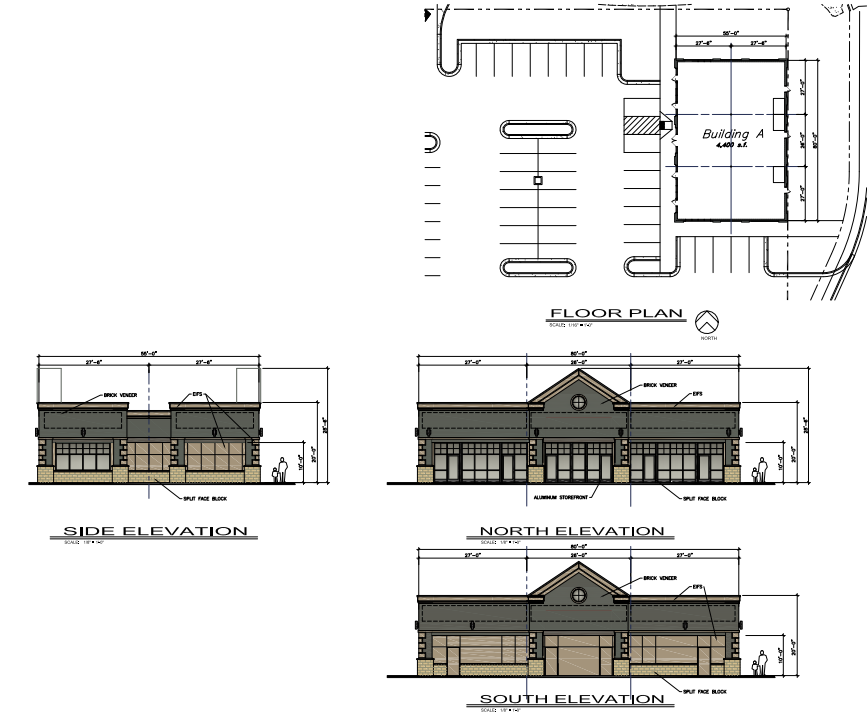 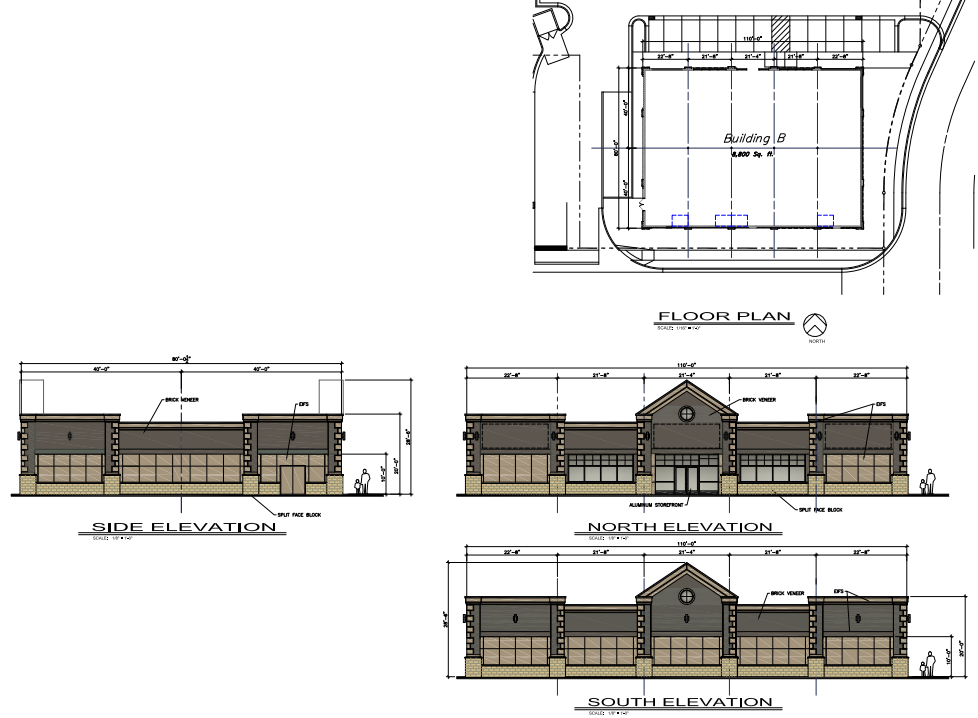 As with the AFCU building, improvements are needed to maintain a colonial style, including pitched roofs, potentially dormers, white pillars, Palladian windows, etc.

lighting calculations, which show the illuminance in footcandles for each area of the project. A footcandle is the amount of light you would get within one foot of a candle.

lighting details show the types of lights to be used, which should be full cut off to prevent light from shining up into the sky.

A traffic study is required for commercial projects, and Amsource provided a

traffic study conducted by Falcon Traffic. The study looked only at PM peak traffic since the AFCU will be closed during the AM peak. The peak hour used was 5:00 pm.

The study includes maps showing the existing traffic during the PM peak hour: 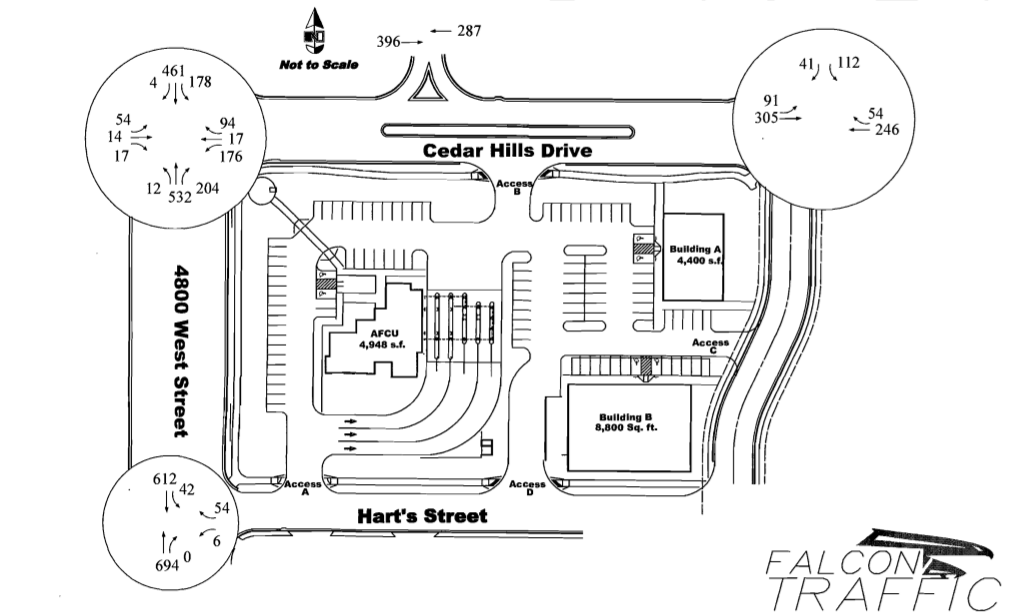 the traffic generated by the site: 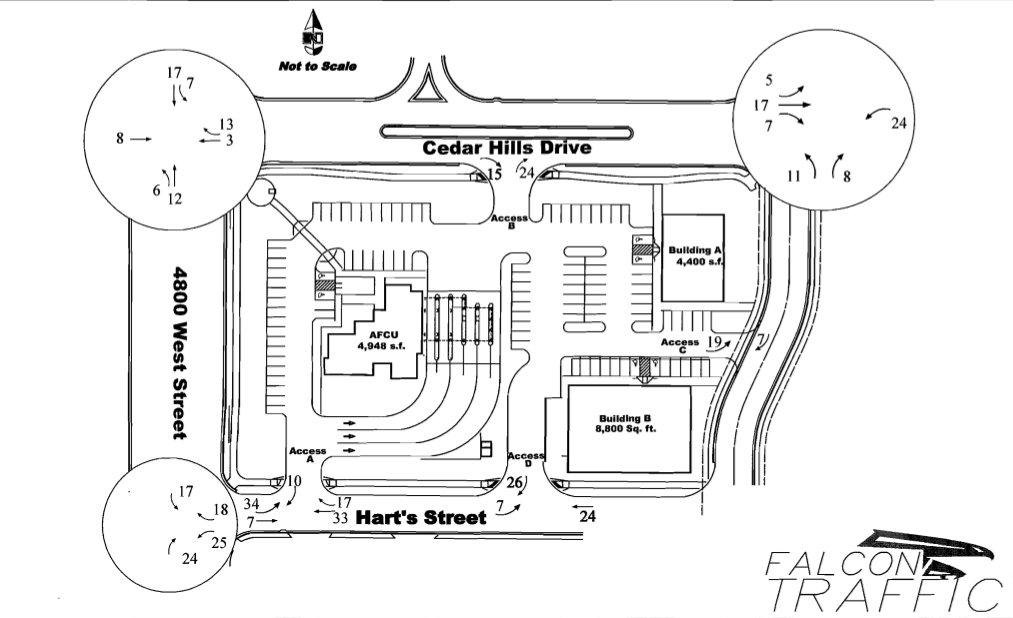 and the traffic generated by the site added into existing traffic: 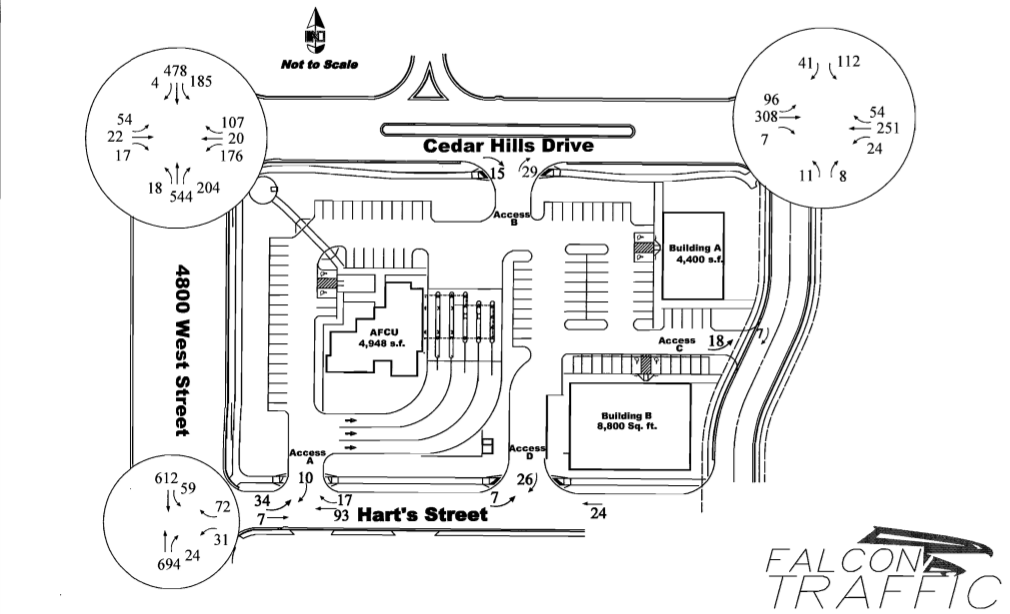 The result of the study is showing the level of service at the site, which is rate on a scale from A to F. The intersection at Harts and North County Blvd. shows no significant change: 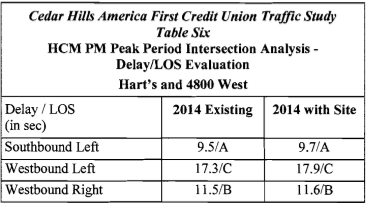 Note there is an existing C rating for a westbound left turn, meaning turning left from the road at Harts onto North County Blvd.

When the road to the east of the development is put in, it will be directly across from the main Walmart entrance on Cedar Hills Drive. The results for this intersection are: 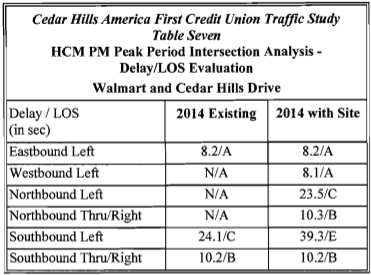 Note that there is an existing rating of C to turn left out of the Walmart parking lot, which I suspect is even worse during the school AM rush hour. With this project, that turn becomes an E rating, which will cause significant frustration for Cedar Hills residents wishing to go home after visiting Walmart. Turning left out of the projected development to proceed west on Cedar Hills Drive will have a rating of C.

The council should explore whether a signal will be needed at this intersection when the road is built.

Other documents Amsource has filed include:

The council voted to grant preliminary approval subject to the first two conditions in my recommendation list. The council and staff will be working on these additional recommendations as the project moves forward.