The Utah State Developmental Center has released a Master Plan for the portion of its land south of Lone Peak High School and north of the Murdock Canal. I will review this plan and discuss some of my concerns as this relates to Cedar Hills.

The master plan was released in June 2013. This shows the planned area, south of Lone Peak High School: 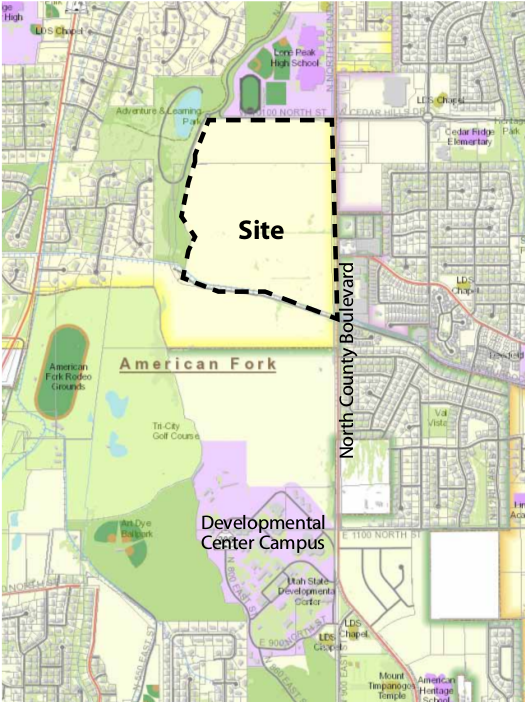 The plan calls for

The Highland City zoning map shows the area is zoned residential, but the 2008 General Plan shows the future zoning as "South Highland Mixed Use Center".

Below is an overview of the master plan for the development: 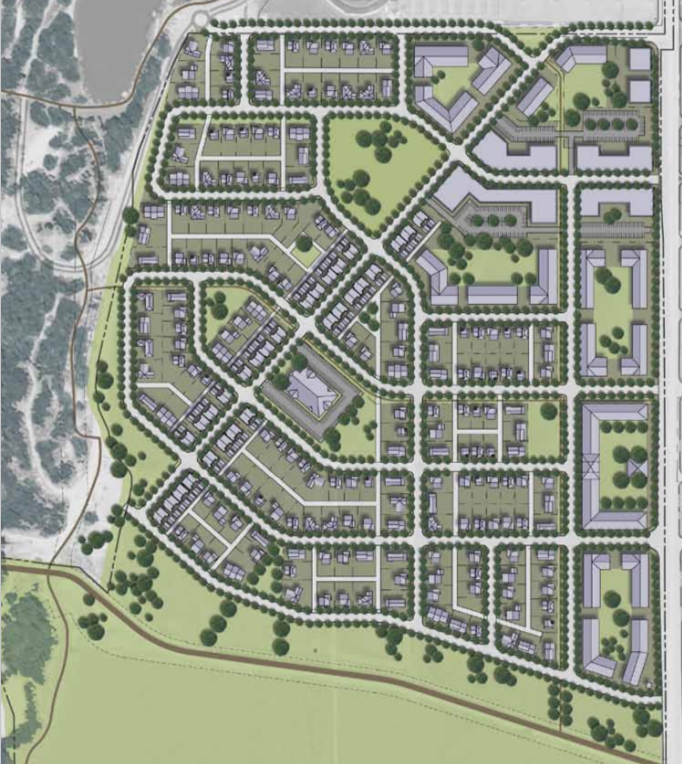 The east-west connector, also known as the Murdock Connector, has been a subject of planning for a number of years. The major difficulties have been acquiring the land and getting agreement from Highland City on the location of the street. As part of the master plan, there are several alternatives for the road when it enters the development: 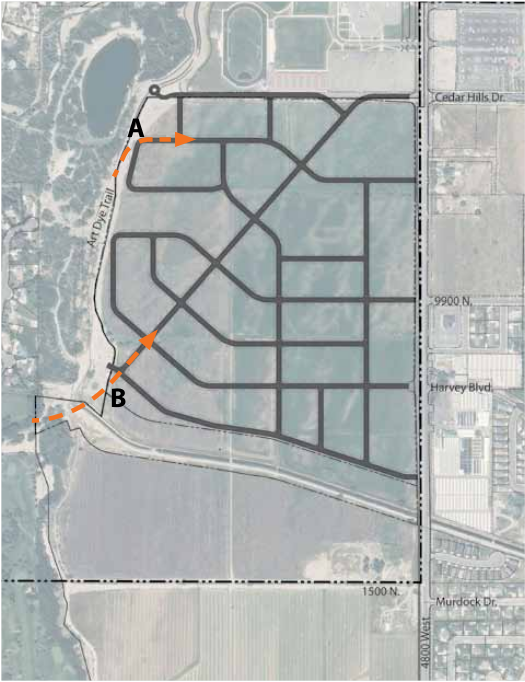 There are two proposed entry points from the west, shown as points A and B on the map, which is from page 36 of the plan. The preferred access is likely at entry point B, because the plan emphasizes the utility of the diagonal road:

The diagonal road illustrated in the plan captures a high percentage of vehicle trips in the project area and directs them through the commercial district in the north east corner of the project site. This also has benefits for the existing commercial areas built in that vicinity.

One negative consequence would be the increased traffic on Cedar Hills Drive, due to commercial demand. This could result in increased traffic farther east on Cedar Hills Drive if drivers view the road as an easy east-west access to the canyon. Thankfully, we do have traffic calming devices already installed, so drivers would likely view the route north on North Canyon Blvd to be quicker. However, traffic could especially be bad during opening and closing times for Lone Peak High School, since this intersection already has heavy traffic at these times.

Previously, staff with Cedar Hills have expressed a preference for connector to go through Harvey Blvd. This project is early enough that if this is our preferred route, we should be expressing this to state officials. Another alternative would be to bring the connector into the commercial area just south of Harts, to feed into a shopping district that includes the city owned land north of the mortuary, with an additional stop light at North County Blvd.

The plan proposes rerouting Cedar Hills Drive once it gets a short ways west of the intersection at North County Blvd. The plan states:

Some minor access points for Lone Peak High School may need to be re-configured to allow for intersection stacking lengths and safety. It is also anticipated that traffic calming measures will be implemented along the north side of the site to enhance pedestrian safety in the vicinity of the school.

By using the term "minor access points", I think the state has understated the impact to Lone Peak. This is the primary access point to the high school, and includes access to the student parking lot, the gyms, the auditorium, and football field. This plan would require that all traffic entering or leaving the school through this area would have to contend with traffic from the planned residential and commercial development, as well as through traffic from Highland and American Fork. Traffic conditions there are already poor when school is starting or ending, and this could have a significant impact at a key intersection for our city.

The master plan does include a traffic study for the three intersections shown below: 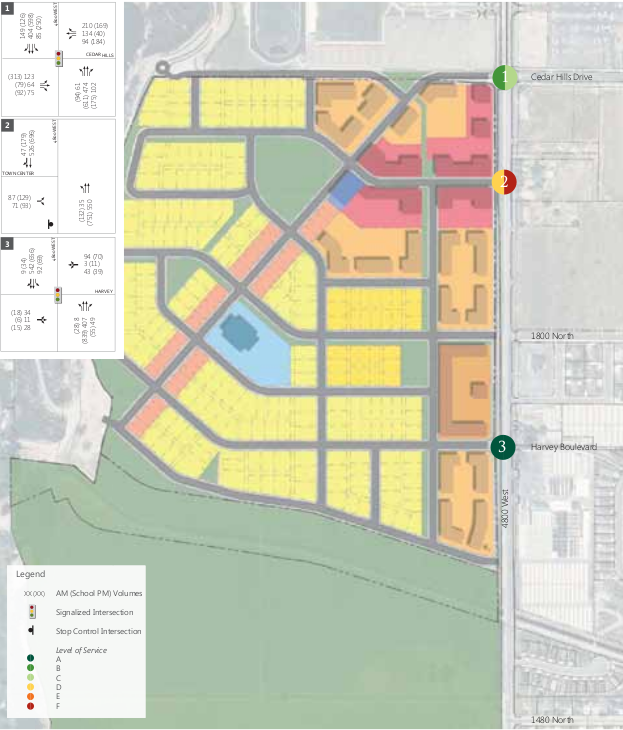 The results are shown here for morning and evening:

The intersection at Cedar Hills Drive and North County Blvd is projected to have a level of service of C during the afternoon, which means "stable flow, fair signal progression, significant number of vehicles stop at signals, and an average delay per vehicle of 20.1 to 35.0 seconds. This study takes into account the current level of traffic, plus the traffic resulting from the new development and roads. However, it does not take into account a fully-developed commercial area, so the level of service at this intersection could fall below a C. 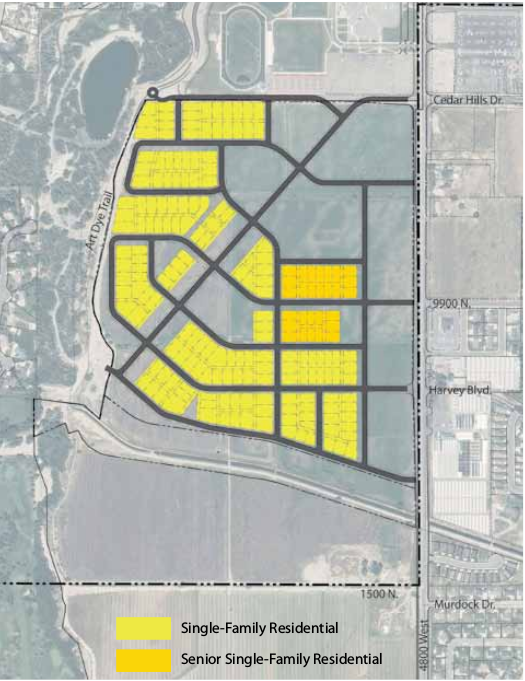 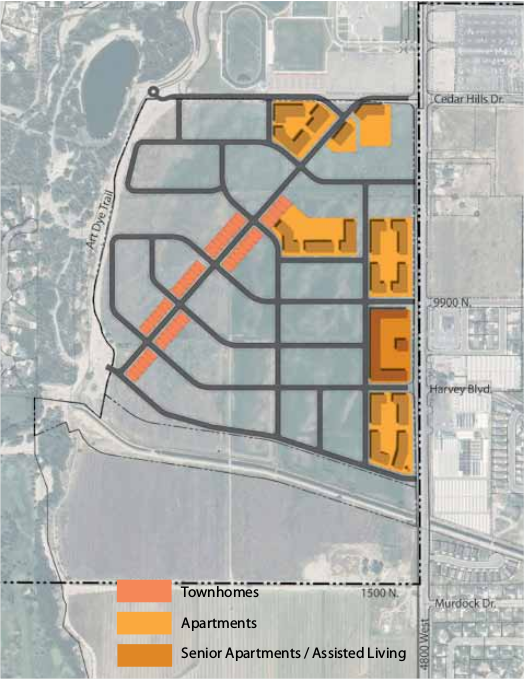 To estimate the amount of new residents for the area, I expect an average of 4 residents per house and townhome, 3 per apartment, and 2 per senior housing. This would result in a total of 3510 additional people living in this area, or 1/3 the population of Cedar Hills. This would include 1000 children from the homes and apartments, and many of these would attend Cedar Ridge and Deerfield Elementary, since these are the closest schools. Likewise, Lone Peak and American Fork High Schools would receive additional students.

Residents have expressed concern about the impact of an additional 600 residents in the proposed senior living facility. The impact of the development in Highland would likely be significantly greater. The increased number of residents in apartments and senior housing would also cause a significant impact on law enforcement and EMS resources for Lone Peak Public Safety. The senior living homes and apartments would reduce demand for senior housing in the proposed facility for Cedar Hills. 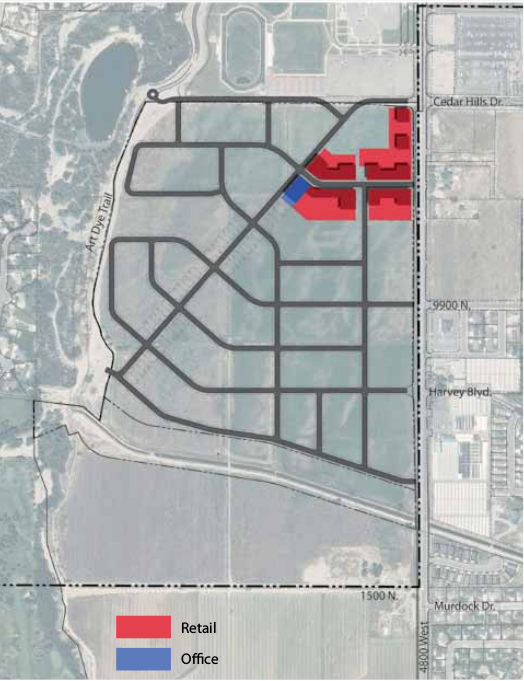 The study also includes a retail analysis, which states:

This study seems to be more positive than those we have heard in recent council meetings, and indicate that our commercial area may be better positioned for future growth than we have heard from other sources.

The development has some open space planned, including a large 3.2 acre park that can accommodate recreational fields, a water feature, or other amenities. 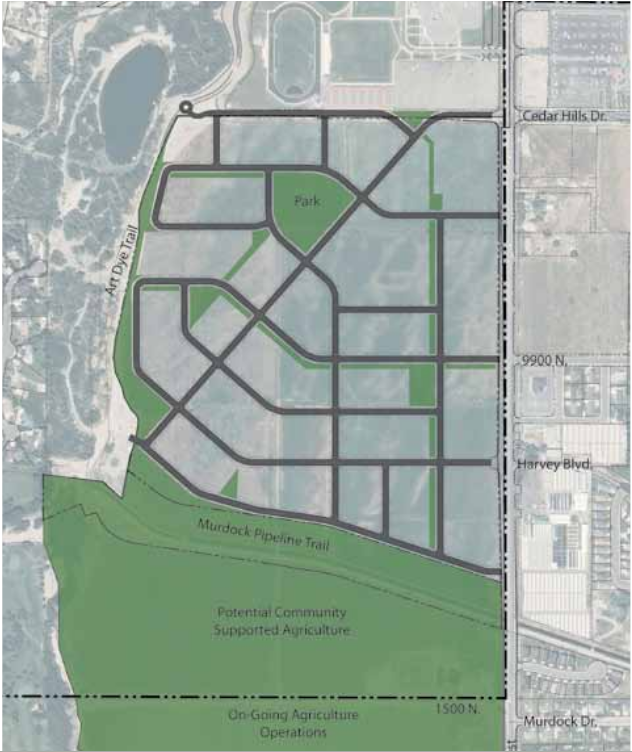 There are also a number of neighborhood parks and access to the Art Dye Trail and the Murdock Trail. A community center is also planned, which could house a gym, senior center, or other facilities. 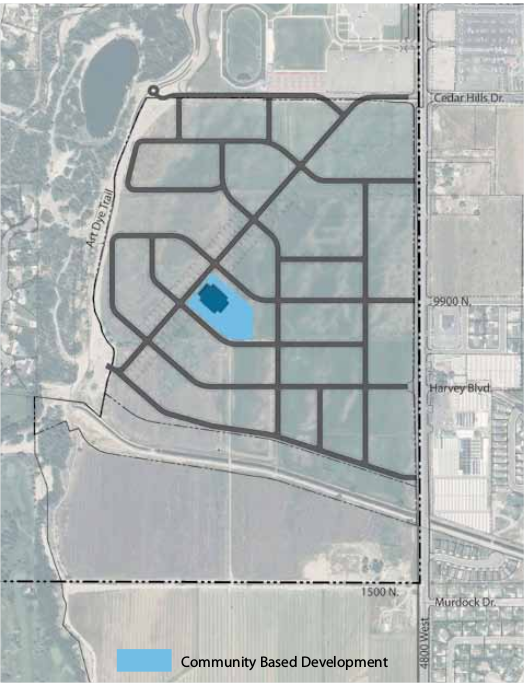 It will be difficult for Cedar Hils and our neighborhood schools to avoid some of the impacts of traffic and additional families that will come with this planned development. The city should weigh the advantages of several connection points for the east-west connector, particularly Cedar Hills Drive versus Harvey Blvd or an access road into the city-owned land in the commercial area. Our goals should be getting the best access into our commercial area, while reducing congestion at a major intersection for our city.

Lone Peak High School and Alpine School District should be working closely with the state to ensure the access points to the high school are enhanced by this development, and negative impacts mitigated.