On Thursday, 14 August 2014, the city held a town hall meeting discussing our pressurized irrigation system. This meeting discussed the capacity of our water system, how it will react under various scenarios. The bottom line is that continued operation of our system at the levels we saw in 2013 will likely cause premature failure of key system components and unreliable system performance. If we are able to implement conservation measures that reduce our water usage to reasonable levels, then our irrigation system should have adequate capacity and performance.

How the Water System Works

Our pressurized irrigation system consists of water sources, storage ponds and tanks, pumps, and pipes. An overview is shown in the schematic below: 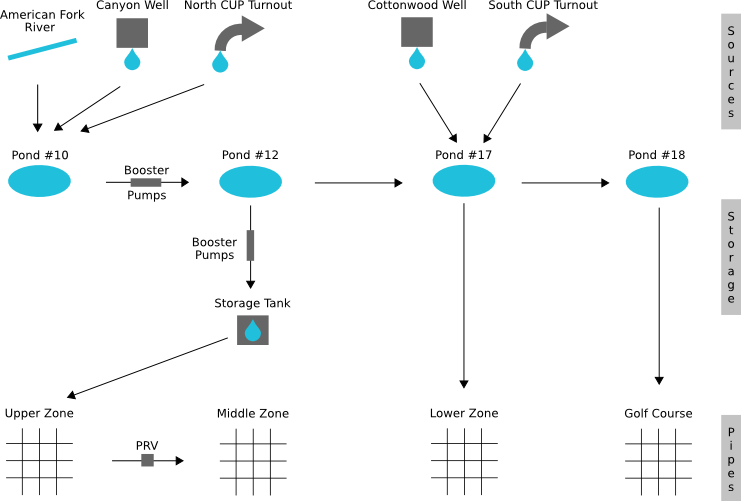 To obtain water for use by residents, a city purchases water rights in various sources, either to take water out of a river or lake, or to drill a well and take the water from an underground aquifer. Typically a water right is a certain number of shares in a system. The amount of water represented by a share changes each year and depends on the amount of snow melt and rainfall received. For example, if a city owns 500 shares in the water coming from American Fork, out of a total of 10,000 shares, then it owns 500/10000, or 5% of the water from the river that year.

Note there is also a Harvey Well used for culinary water. While this is not a component of the pressurized irrigation system, it can still affect the system. If the Harvey pump was to experience mechanical difficulties, then the city would need to switch the Cottonwood Well to the culinary system in order to provide drinking water. This would make the Cottonwood Well unavailable for pressurized irrigation.

Currently, demand is high enough that the city needs the Cottonwood Well for irrigation during hot summer months. This means that if the Harvey well experienced difficulties during July or August, then there could be a significant lack of irrigation water during these times. This is particularly unfortunate because the Cottonwood Well was designed to provide redundancy and not be heavily used for irrigation during the summer. Due to high usage, the city has essentially used up its redundant facilities.

From these sources, the city stores water in a number of locations:

Pipes are used to deliver the pressurized irrigation water throughout the city. The city is divided into three zones, the upper, middle and lower zone. The upper zone serves roughly

Using three different zones ensures that pressure is adequate to run irrigation systems without being so high that it breaks the pipes and sprinklers in resident yards.

The city commissioned a study by Hansen, Allen & Luce Engineers to design a water model of our city and then to simulate the city's irrigation system under various scenarios. Richard Noble, an engineer with the firm, presented their results.

The main reason for the study is that the city's usage during 2013 was extremely high as compared to water guidelines established by the USU extension. 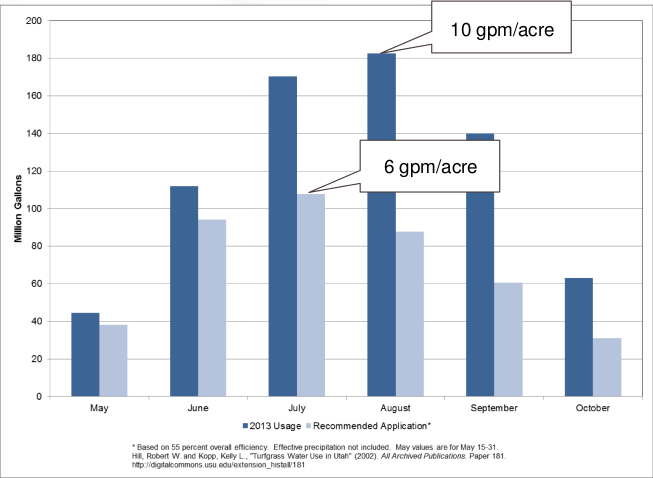 The study authors believe that long-term operation at 2013 levels will cause premature failure of key system components and unreliable system performance.

These graphs show the fluctuation over a period of three days, with low pressures occurring overnight when most people water their lawns and high pressure during the middle of the day.

According to the model, Timpanogos Cove has the most significant problems, with pressures dropping to near zero overnight. However, with conservation, pressures are projected to stay more stable.

Other areas see similar fluctuations based on 2013 usage, but do much better with conservation:

Mr. Noble then presented several scenarios that were modeled. Scenario 1 examines the capacity of our system under current (2013) demands. In this case, the results show that there is inadequate pressure in the neighborhoods surrounding Timpanogos Cove Park, as illustrated above.

In addition, the are marginal pressures in some areas of the middle and lower zones. The system experiences high velocities in excess of seven feet per second in several key pipes, which can wear them out prematurely. In addition, there are high pressure fluctuations in several areas.

Note that this study was done for our current number of homes. In the future, we can expect 10% more homes, with an accompanying 10% higher demand, making these problems a bit worse.

Scenario 2 examines the system with water conservation methods in place, which reduce city-wide demand to 3.5 million gallons per day, This could be due to residents voluntarily following state guidelines or installing waterwise landscaping, or the city installing meters on the system and residents reducing water consumption due to market forces.

In addition, pipe velocities are improved, leaving only a few trouble spots. These can be addressed by upsizing as needed when leaks occur.

Even in this scenario, there is one concern for the city. The booster pump at the south CUP turnout is improperly located, causing low pressures for residents living north of the pump. The city may need to examine reconfiguring this pump at some point in the future.

Scenario 3 examines the system with water conservations methods in place, for a future when the city is completely built out. Results from this scenario indicate that the pressurized irrigation system appears to have adequate capacity for build out conditions if water conservation measures are implemented.

In this case, the city could increase deliveries from the North CUP Turnout to deliver water to the system. However, this is a short-term situation only, because the quantity of CUP water the city can use is limited by contract. Even in this case, the city would need to take immediate action to reduce demand on the system so that we could avoid high velocities in the booster pump.

These scenarios examine the system if a booster pump fails at Pond #10 or Pond #12. There is enough redundancy in the pumps that we can get by, but normally these pumps cycle on and off so they are not overworked. If one of them fails, then the others would need to stay on for longer periods, which increases the likelihood that another failure occurs. In this case, the city would need to take immediate action to reduce demand on the system, unless we had already reduced demand due to conservation measures.

It was pretty clear from this presentation that Cedar Hills needs to start conserving water. Without conservation, our system is being stretched beyond its design capacity. Continued operation at the levels we saw in 2013 will likely cause premature failure of key system components and unreliable system performance. I'll share ideas for conservation that were developed by our water conservation committee in a future post.