On Tuesday evening, November 12th, the Planning Commission and City Council held a joint meeting on the commercial development, with Doug White, the developer, and Cory Shupe, with Blu Line Designs.

Cory Shupe gave a presentation on the proposed development, discussing the master site plan that includes a senior living facility (55+), a movie theater, restaurants, and retail spaces. First, he provided an overview of the senior living facility, showing the location and placement of the building, as well as the 1/2-mile exercise path surrounding the site. Next he showed some of the computerized renderings that show the facility in relation to several views in the city. These are all slides shown previously and discussed in my previous blog entry.

I questioned Mr. White on this picture, because it the relative height of a building can be fudged in a photo by zooming in or out. He did not have exact heights of the buildings he was showing, but was estimating comparative height by knowing the typical height of a residential floor vs a commercial floor, which is somewhat larger. We should get some accurate measurements of surrounding buildings so we have a better idea of the height of the senior living facility relative to its surroundings.

Mr. Shupe also discussed this slide, which was shown in previous meetings:

This shows that the closest point of the facility to residential lots is 98 feet. The recommended maximum height of a building is 30' with 30' of setback. An additional height bonus of 1' per additional 2' of setback MAY be granted by the plannign commission, up to a maximum of 50'. From the drawing, the facility appears to fall within this limit at four stories, due to the extra setback, but may be slightly over the 50' limit at five stories.

Mr. Shupe also showed some slides of a commercial project in Chandler, Arizona. This area is similar in size to the development he is planning, and shows some of the character he is trying to bring to our commercial area. 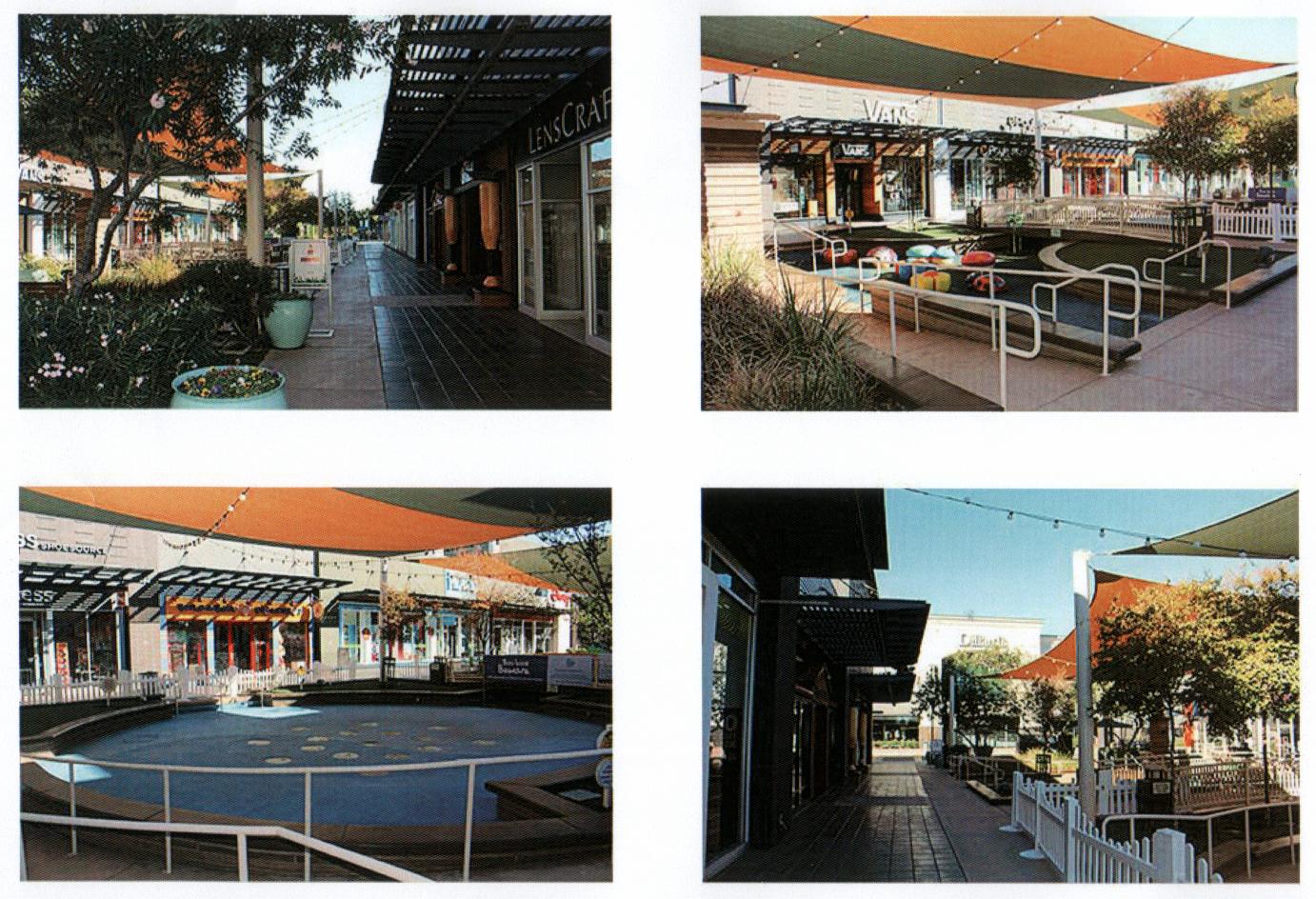 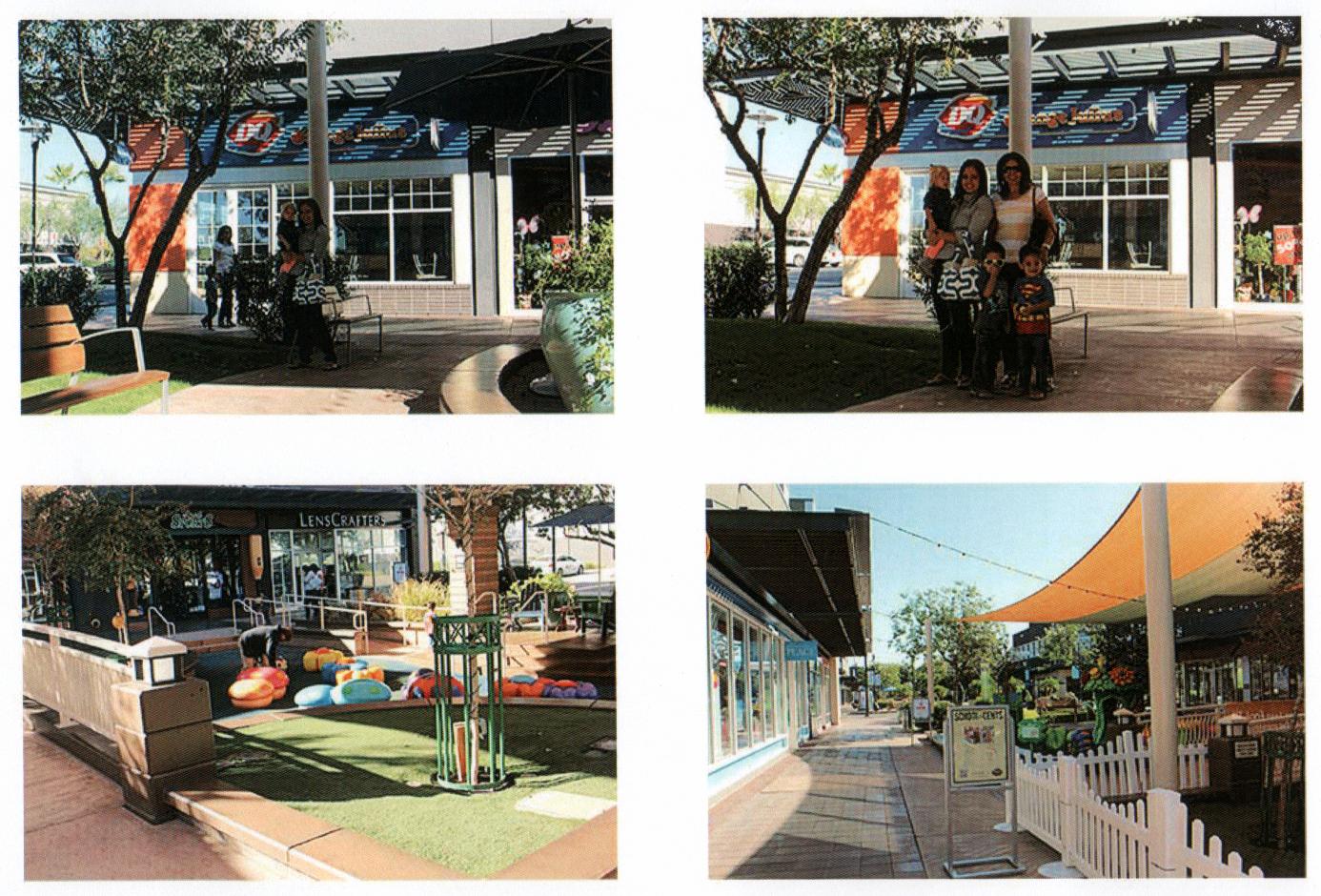 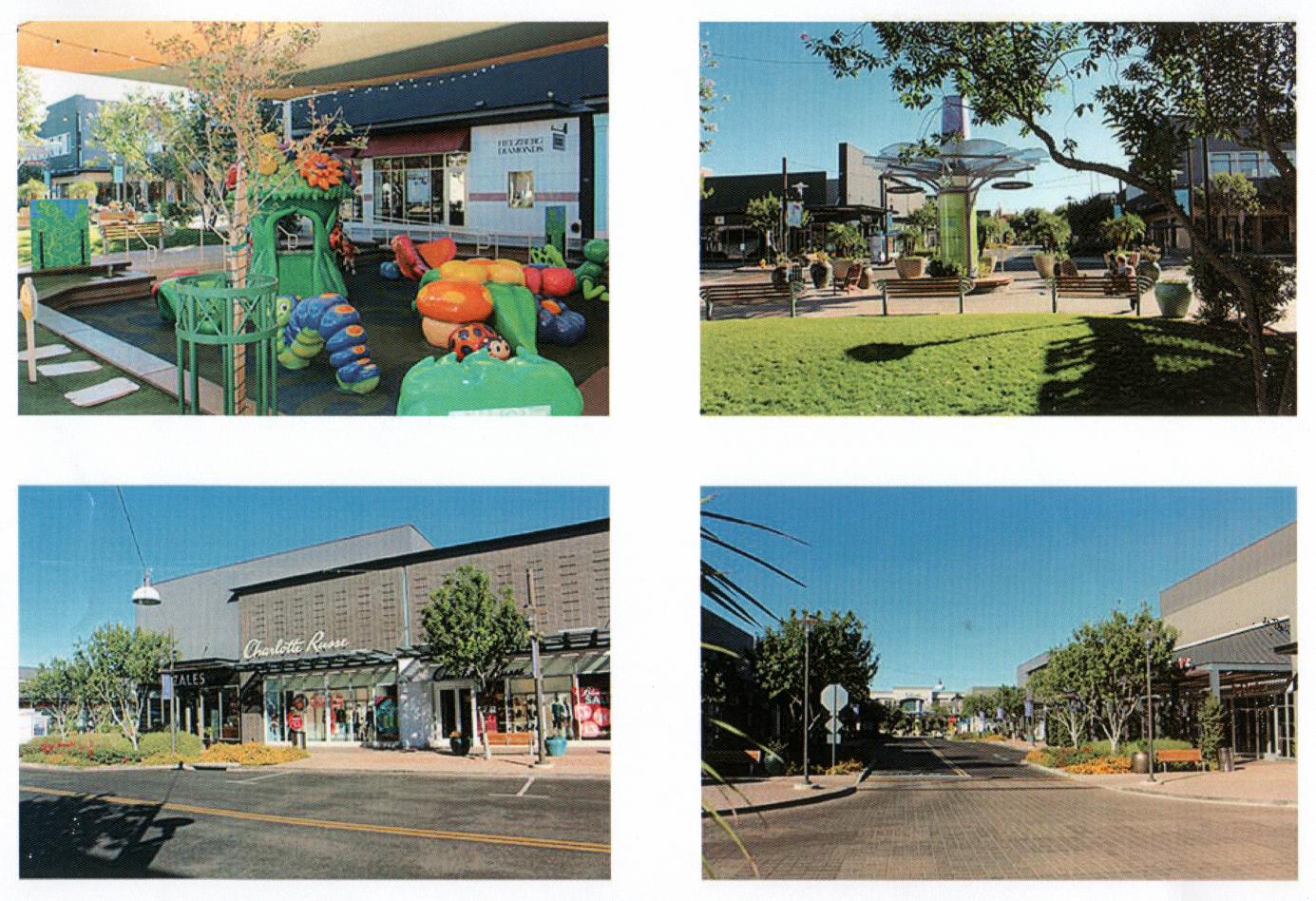 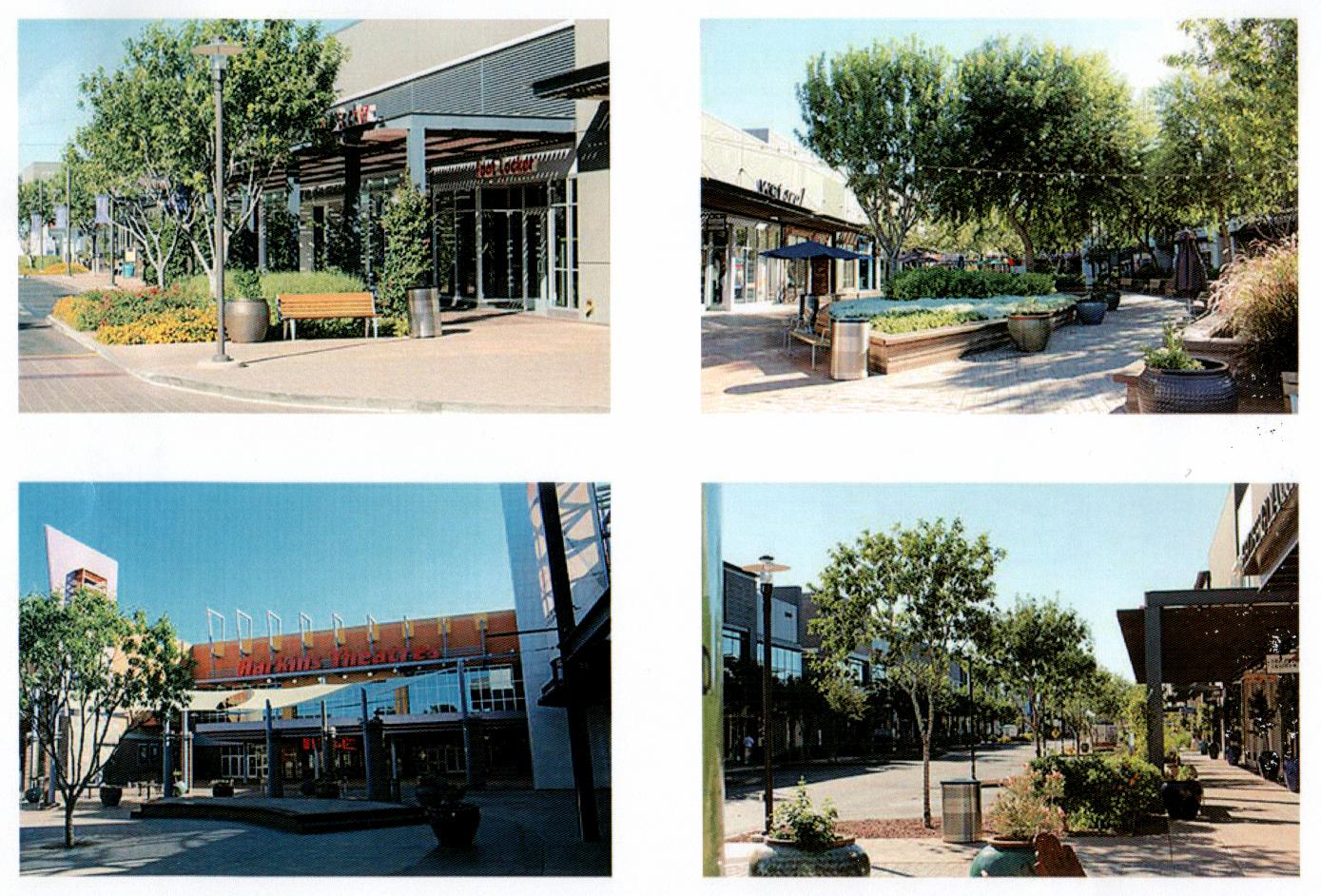 Following this presentation, some members of the planning commission and city council asked questions of the developers. Mr. Driggs wanted to know whether we could trust the developer to follow through on his commercial plans for the area. Mr. White stated that they will own the facility and some surrounding retail area. They have an incentive to make the area commercially attractive to the residents. In particular, they want to be able to get retail toward the back of the area, and not just a strip along the street. That is why he is proposing a main street type development.

Ms. Martinez wanted to know about the ages of residents in a 55+ building. Mr. White stated that no children are allowed, by law, and this was also stated to us on our tour by the property manager of Rosegate. The 80/20 rule does apply, so those younger than 55+ can live there, but only with others that are 55+ in the same space. Ms. Martinez also wanted to know if these units would be for sale or lease, and Mr. White stated that these would be for lease.

Mr. Goodwin, the assistant city manager and city planner, gave a presentation on the city's Design Guidelines. Some of this is a repeat from my earlier blog post on city code and the design guidelines.

This is an important statement from the guidelines:

While the intent of this Plan is to provide standards for approval, it is not intended to be so rigid as to deny all flexibility and latitude that may be necessary for individual users within the Plan area.

This demonstrates that these are not rules, but guidelines for the planning commission and city council as they make decisions on whether to approve a development. There are requirements in city code on noise, light, pollution, etc. The guidelines do emphasize viable mixed use and a walkable zone.

The commercial zone is divided into three sub-districts. The Smart property is in the Office/Retail sub-district. There is discussion of the structure height in this section.

One to three story buildings are permitted although two-story buildings are encouraged in order to more fully convey the desired architectural theme. Buildings within the Office/Retail Development may be erected to a maximum height of thirty (30) feet. An additional height bonus of one (1) foot per additional two (2) foot increase from the required setback may be granted, up to a maximum height of fifty (50) feet occupied space, with unoccupied space approved by the City Council with a recommendation from the Planning Commission. The Planning Commission may increase the required setback or require additional architectural elements for buildings taller than thirty-five (35) feet, if after due consideration, feel it necessary to mitigate any negative impacts that the proposed development may have on the residential development. Height is measured from average, finished grade to the top of cornice or parapet for flat roofs, and the midpoint of rake for sloped roofs.

There are different definitions of height, which is confusing.

The building size shall be reviewed by the City Council and potentially approved based on such items as building placement, aesthetics, noise control, lighting design, traffic control, etc. to give the feel consistent with the overall commercial development, as well as the community as a whole.

Long and monotonous walls and roof planes are not permitted. The apparent mass of large buildings shall be minimized by manipulating the building form by using offsets and recesses and variations in height. Smaller, individual buildings that tend to break up parking areas and create visual interest are encouraged.

Exterior construction is normally of brick in traditional colors like red and brown, and makes use of substantial exterior moldings. Wrought iron or copper accents are also used. It is expected that this theme will create intimacy and interest by limiting the use of those architectural elements that only cater to the widespread domination of the automobile. That is to say, architectural designs should be kept in such a scale so as to maintain a human, rather than automobile, orientation. The inclusion of street level windows, wide walks and appropriate signage are a few of the elements that must be considered in maintaining consistency with this theme. The appropriate selection of materials and colors are also essential in maintaining consistency with this theme and in meeting the goals of this document. Examples of several types of architecture that may be appropriate as part of this development can be found within this document.

Mr. Goodwin discussed that the building has community gathering points and activities every night, so it is similar in nature to an assisted living facility, except for having nursing staff on duty. The planning commission and city council have the latitude in the guidelines to decide how to apply these definitions. Mr. Jackman repeated that everything is conditional, so we have to approve everything.

The planning commission and city council then provided some feedback to the developer.

From speaking with the developer afterwards, I think we were able to strike a good balance of expressing resident concerns without being so inflexible that the developer will abandon the project. I think there is a good chance that he will submit a formal application and that the proposed building will be reduced in scope, possibly to three stories with four stories in the middle wings.

I would appreciate hearing your feedback on whether a mixed three-and-four story building would work for you. In addition, how do you feel about attracting sit-down restaurants and strong retail chains with a theater, versus having fast food restaurants and strip malls?