This item was placed on the agenda at the request of City Council members Trent Augustus and Mike Geddes. A developer, Doug Young, has approached the city to build senior housing and wants some direction regarding what kind of senior housing is allowed in the commercial zone. You may recall that this was a major issue in our city last year, and is covered in these past posts:

The plans for this building were granted preliminary approval by the Planning Commission. However, in subsequent weeks, numerous residents expressed concerns regarding the height, density, and scale of the building, as well as the impact on the surrounding community, the integrity and quality of the surrounding community, and the use of high-density residential within our commercial zone. Ultimately, faced with significant negative feedback from residents, Mr. Young chose to withdraw his application for preliminary approval.

Note, the planning commission and developer have stated several times that the only or primary concern residents expressed was with the height of the originally proposed building. I do not believe this is accurate. Residents expressed all the concerns I list above.

This fall, Mr. Young chose to revive his plan as an assisted living facility. At the 13 November 2014 Planning Commission Meeting, Cory Shupe, from Blu Line designs, presented a conceptual plan to the commission. This is shown below: 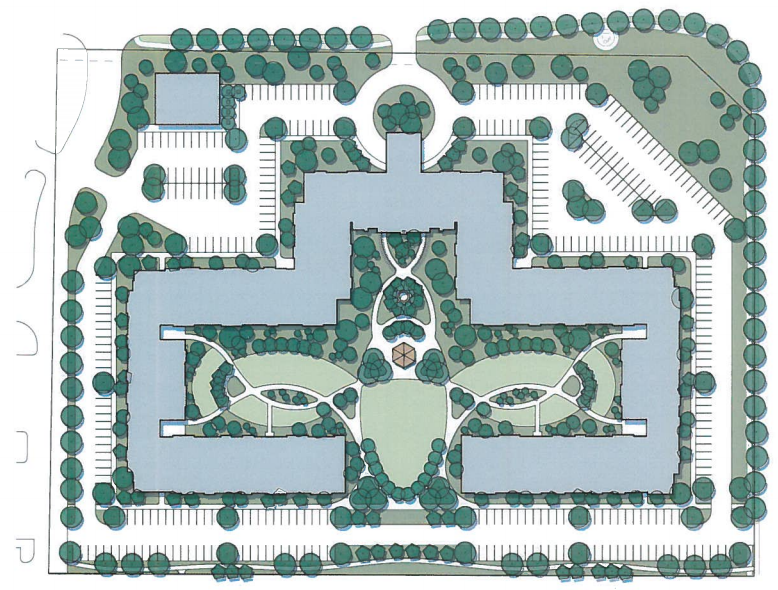 According to Mr. Shupe, a planning consultant, he and Mr. Young reviewed our design guidelines, saw that assisted living is a conditional use, and decided to erect this kind of facility instead. He indicated that Mr. Young had already contacted several parties that were interested in this kind of development. Mr. Shupe stated that the building would be 500+ units with assisted living, and that they were determined to develop a building that met our city code and design guidelines, which he interprets to allow a building as tall as 50'. Note that the small additional buildings are possible retail and office uses, but Mr. Shupe stated these would not be built in the first phase.

The planning commission pointed out that they had agreed that congregate care was allowed in the commercial zone because it is similar to an assisted living facility, but that the city council would have the final say.

The issue the city council was asked to consider was whether congregate care facility falls under the assisted living use or the residential, attached units use.

To provide some background, the commercial zone is divided into three subdistricts, as shown in the map below: 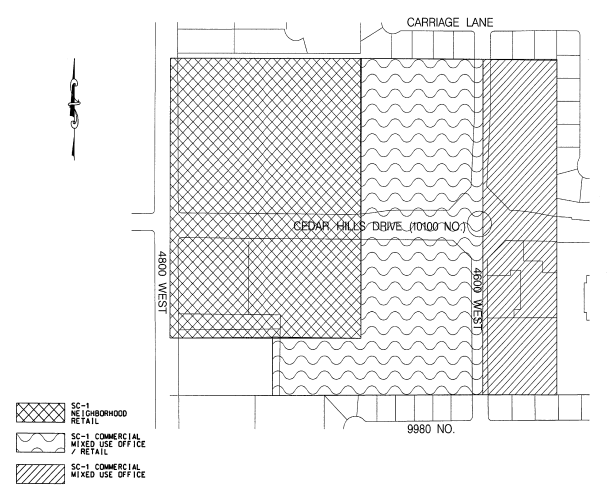 The permitted and conditional uses in these subdistricts are shown in the table below: 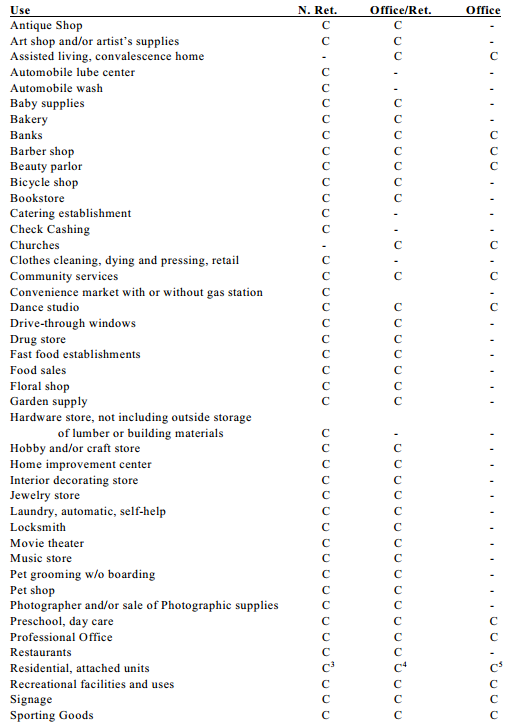 Note that the residential attached units have several footnotes:

Note that congregate care is not listed as a use. However, the design guidelines state that

In considering this issue, Mr. Shupe, Trent Augustus, and Mike Geddes all argued that congregate care is similar to assisted living. Their main reasons are that congregate care provides special services to senior citizens, similar to an assisted living facility, but on request instead of to all residents. Mr. Shupe called this an a la carte approach, where residents are charged since meals and healthcare are not provided around the clock, but may request them on demand and pay extra. I asked Mr. Shupe if he had a list of those kinds of available services from other congregate care buildings that Mr. Young operates, but he did not have these available.

Mike Geddes indicated that senior housing like Treeo in Orem provides these kinds of services. Treeo provides scheduled transportation to shopping & appointments, organized activities, concierge-style services, on-site dining, an ice cream parlor, housekeeping and maintenance, and a 24-hour staff. They also offer a variety of floor plans, up to 2 bedrooms, and guest suites residents can reserve for visiting family. Note, this property is 3.5 acres as compared to 11 acres for the proposed development in Cedar Hills. The Treeo building is four stories with 143 units and 123 parking stalls.

Note that in the Orem Planning Commission minutes the following was recorded:

The applicants request the Planning Commission recommend approval for a zoning ordinance amendment and rezone for an age restricted senior independent living facility with 143 units located generally at 256 East Center Street. The proposed use is similar to an Assisted Living Facility which provides full time care and licensed by the State of Utah. The Independent Living facility proposed by the applicant provides similar services such as shared common areas, restaurant services, a fitness room, and scheduled transportation needs. However, medical services are not provided by the facility but may be provided through licensed third-party home health care providers.

Rezoning was required, but the use was considered similar to an assisted living facility because of the types of services offered.

Assisted living is intended to enable persons experiencing functional impairments to receive 24-hour personal and health-related services in a place of residence with sufficient structure to meet the care needs in a safe manner.

This portion of state code includes a number of regulations of these types of facilities, relating to medical care, meals, housekeeping, laundry, and so forth.

Rob Crawley's primary concern was reducing the area for retail in our commercial zone.

My thoughts on this issue include:

Overall, this was one of the most difficult votes I have had to make on the council, and I voted to treat congregate care as assisted living, based on resident preference for congregate care and preference to keep as much retail as possible in the commercial zone.

I would prefer we had revised our design guidelines over the last year, but that has not happened.

This development is in the early stages and still needs to go through the following steps:

There are a number of concerns I would like to see addressed as this plan moves forward.

First, I expect the developer to meet our zoning requirement that assisted living is not permitted in the Neighborhood Retail subdistrict of the commercial zone. I expect the developer to modify his plans to reduce the size of the building to cover only this subdistrict. This important issue was overlooked in the recent planning commission, and conceptual approval should not have been granted based on the current building footprint. The image below roughly shows the area allowed for assisted living as compared to the conceptual plan. 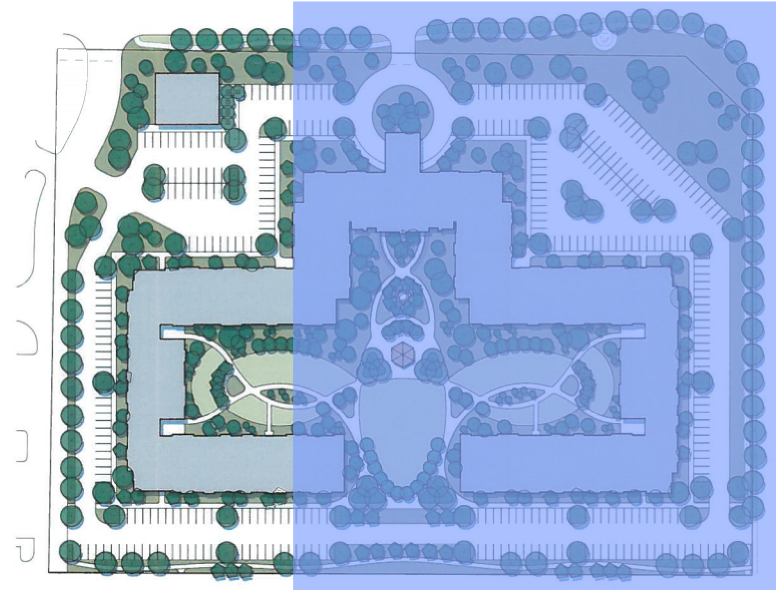 Second, I expect the developer to stay within our height guidelines. The guidelines contain several statements that are relevant here.

The Office/Retail Development shall be of lower intensity than the Neighborhood Retail development. This lessening of intensity shall be accomplished through the use itself and through a combination of building location, height, orientation, landscape buffering and specific site plan design.

This indicates that building height should be taken into account to lesson the intensity of use.

One to three story buildings are permitted although two-story buildings are encouraged in order to more fully convey the desired architectural theme. Buildings within the Office/Retail Development may be erected to a maximum height of thirty (30) feet. An additional height bonus of one (1) foot per additional two (2) foot increase from the required setback may be granted, up to a maximum height of fifty (50) feet occupied space, with unoccupied space approved by the City Council with a recommendation from the Planning Commission. The Planning Commission may increase the required setback or require additional architectural elements for buildings taller than thirty-five (35) feet, if after due consideration, feel it necessary to mitigate any negative impacts that the proposed development may have on the residential development. Height is measured from average, finished grade to the top of cornice or parapet for flat roofs, and the midpoint of rake for sloped roofs.

The guidelines indicate that buildings taller than three stories should not be permitted. In addition, buildings should be limited to 30 feet in height, though a bonus up to 50 feet may be granted based on setback. The wording here is important. Our code consistently uses may as an option for the planning commission and council, not a requirement. Both developers and planning commission have been incorrectly treating the 50' height as a maximum the city must grant rather than a height they may allow.

As a means of harmonizing development within the project with existing and planned development within the surrounding area, the planning commission may, as a condition of its approval, specify or require changes in the minimum and maximum height of buildings and structures, the type and style of architecture, the character and nature of landscaping, the choice of building and plant materials, the pattern of circulation, the location and siting of buildings, fences, walls, utilities, lighting and sprinkling facilities and other structures, as well as the nature and extent of drainage facilities. (Ord. 10-11-95A, 10-11-1995)

This gives the planning commission latitude to increase or decrease the maximum height of a building.

Based on my reading of the code, I believe both the planning commission and city council may control the height of the building. My preference is to limit the building to a maximum height of three stories, as envisioned by the city when adopting the design guidelines.

Third, I expect the developer to pay careful attention to our density limitations in the design guidelines. This includes:

Design and planning of and operation within the commercial district shall be primarily for the benefits of the residents of Cedar Hills. Considerations shall include density, diversity and design.

Land development shall be sensitive to adjacent single-family housing.

In addition, the Mixed-Use Office/Retail sub-district is specifically mentioned as intending to have lower density based on the size, scale and height of the building:

The Mixed-Use Office/Retail designation is intended to accommodate less intense uses than found in the Neighborhood Retail designation. The lower intensity may be due to size, scale and height of the structure or due to a less-intense land use.

The developer should limit the density so that it is less intense in use and in keeping with the character and uses of the surrounding neighborhoods.

Fourth, I expect the developer to provide services similar to that of a senior independent living facility. In the Treeo development in Orem, this includes a dining room in which at least one meal per day is served.

In reviewing this issue, my primary concern is that our design guidelines should be updated. Specifically:

My preference for new zones is: 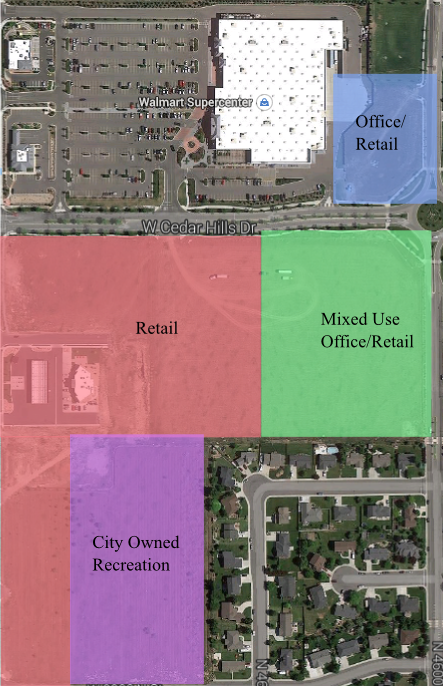 The blue Office/Retail zone would allow only office or retail. The green Mixed Use Office/Retail would allow office and retail, as well as some residential with limitations to two stories and low density and higher requirements for green space. The red retail area would include only retail uses, with mixed use housing only on the second story. The purple City Owned Recreation area would be for city recreation, preferably a community pool. The city already owns this area and the portion to the west, and it was purchased with recreation impact fees.

Zoning is very important. Section *10-1-11 of our city code states:

Uses of land that are not expressly permitted within a zone are hereby declared to be expressly prohibited therein, except as may be permitted by action of the planning commission or city council, pursuant to express authority given under terms of this title. Any person who may obtain state or federal properties by purchase, lease or other arrangement must utilize such properties in accordance with the provisions of this title. Neither the planning commission, board of adjustment nor the zoning administrator shall permit a use within a zone that is not expressly permitted by the terms of this title. (Ord. 6-20-78A, 6-20-1978)

Thus it is imperative that we examine our zoning to be sure it reflects the values and desires of the community.